So who are the Zombicide Survivors based on?

Hello all,
So who are the Zombicide Survivors based on?

My best guesses are (derived at from the cultural memory of the Internet) : 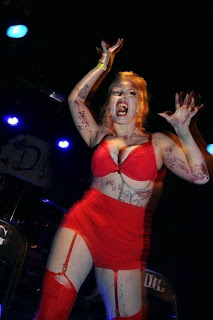 Season two:
Kickstarters:
Achille the Serial Killer - Athony Hopkins as Hannibal Lector in The Silence of the Lambs
Adriana the Shopgirl - Beyoncé Knowles as Foxxy Cleopatra, in Austin Powers in Goldmember
(who is based on Pamela Suzette "Pam" Grier as Foxy Knowles in Foxy Brown)
Brad the Crime Lord - Clint Eastwood as Dirty Harry
Chuck, Momma's Boy - Nicholas John "Nick" Frost as Ed in Shaun of the Dead
Dakota the Convict - Pamela Anderson as ? in ? (Barb Wire?)
Don the Civil Servant - John Cleese as Basil Fawlty in Fawlty Towers
Frank the Repo Man - Thomas William "Tom" Selleck as Thomas Magnum in Magnum P.I.
Fred the Trader - Simon Pegg as Shaun in Shaun of the Dead
Gary the Misfit - Jeff Bridges as Jeff "The Dude" Lebowski in The Big Lebowski
Helen the Federal Agent - Jodie Foster as Clarice Starling in The Silence of the Lambs
Kirk the Old Sensei - Steven Seagal as Rogelio Torrez in Machete (Lawman?)
Lea the Teenager - Emily Jean "Emma" Stone as Wichita in Zombieland
Mack the Car Salesman(r) - Nicolas Cage as Cameron Poe in Con Air

Mike the Miniature Sculptor - Jack Nicholson as Jack Torrance in The Shining
Ralph the Cowboy - Woody Harrelson as Tallahassee in Zombieland
Rick the Stuntman - Jason Michael Statham as Chev Chelios in Crank
Rob the Security Expert - Sean Connery as John Mason in The Rock
Rose the Aunt - Angela Lansbury as Jessica Fletcher in Murder, She Wrote
Ross the Manager - John Goodman as Walter Sobchak in The Big Lebowski
Thaissa the Entrepreneur - Bridget Fonda as ? in ? (Maggie in Point of No Return?)
Smith, Dog of War - Kurt Russel as S.D. Bob "Snake" Plissken in Escape from New York

Note - Oook has made the perfect illustrated list of the Season Two Survivors and their real life counterparts: http://25mm.dyndns-blog.com/wordpress/wp-content/gallery/presse/zombicide_s2_exclusive_survivors_named.jpg (Warning, very slow site...)

The major mystery is Crazy Ned, while Claudia, Dakota and Thaissa are still somewhat mysterious.

Any speculation, comments or tips would be much appreciated!