Hello all,
These were the first of the toxic zombies I painted so the skin tones are a bit diverse. I tried a sickly green (the babe on the far right) but in the end I decided that their postulent green spikes/buboles would be enough to seperate them from the normal zombies (should normal be in crows feet? I guess so :-)). 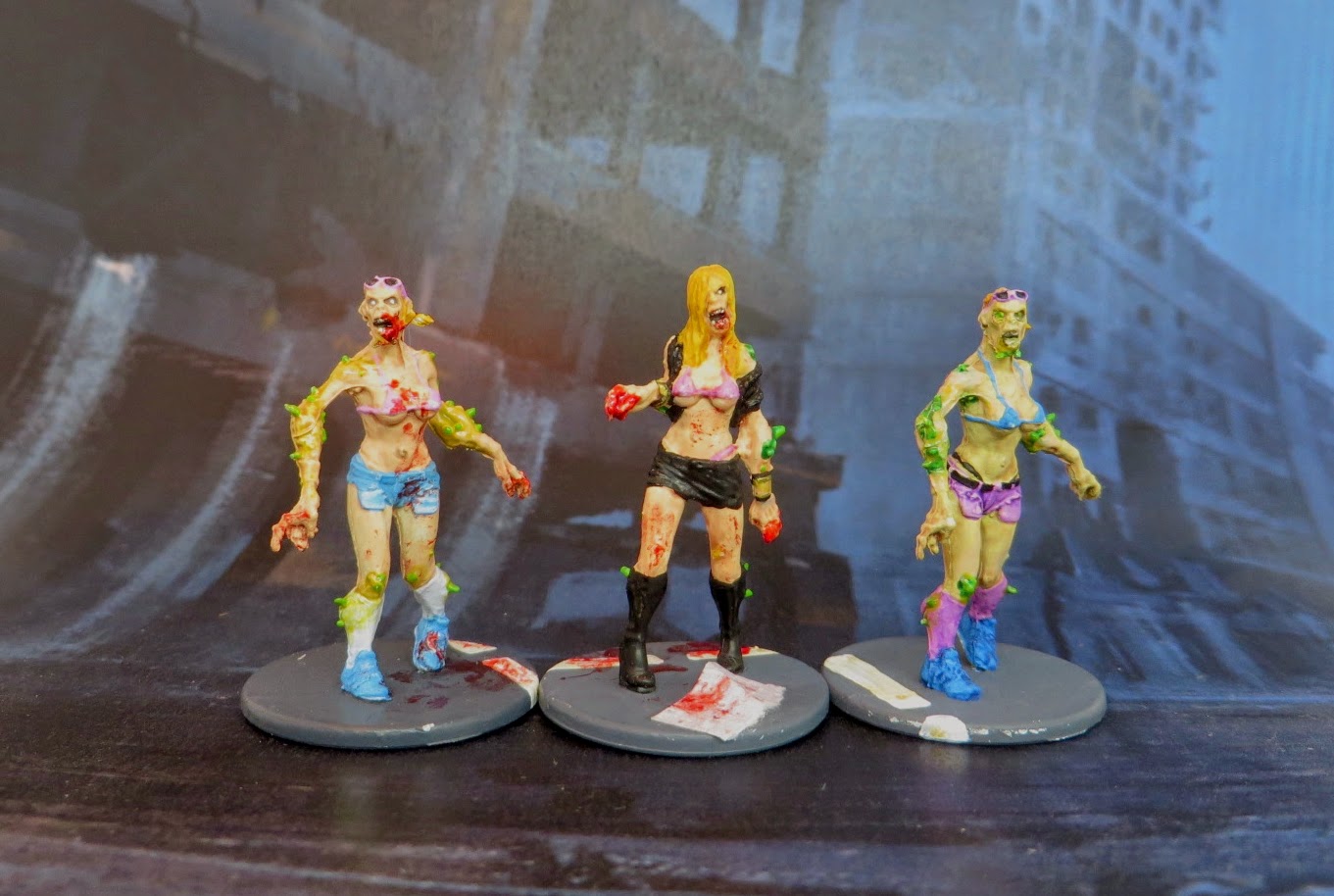 I also tested the new slimy goo-paint from Games Wokshop (can be seen on the chick on the left). Not convinced by it. Looks less like slime than a fuzzy water effect. May use it in the future on bases, but for these rank and file zombies it hardly seems worth the hassle. 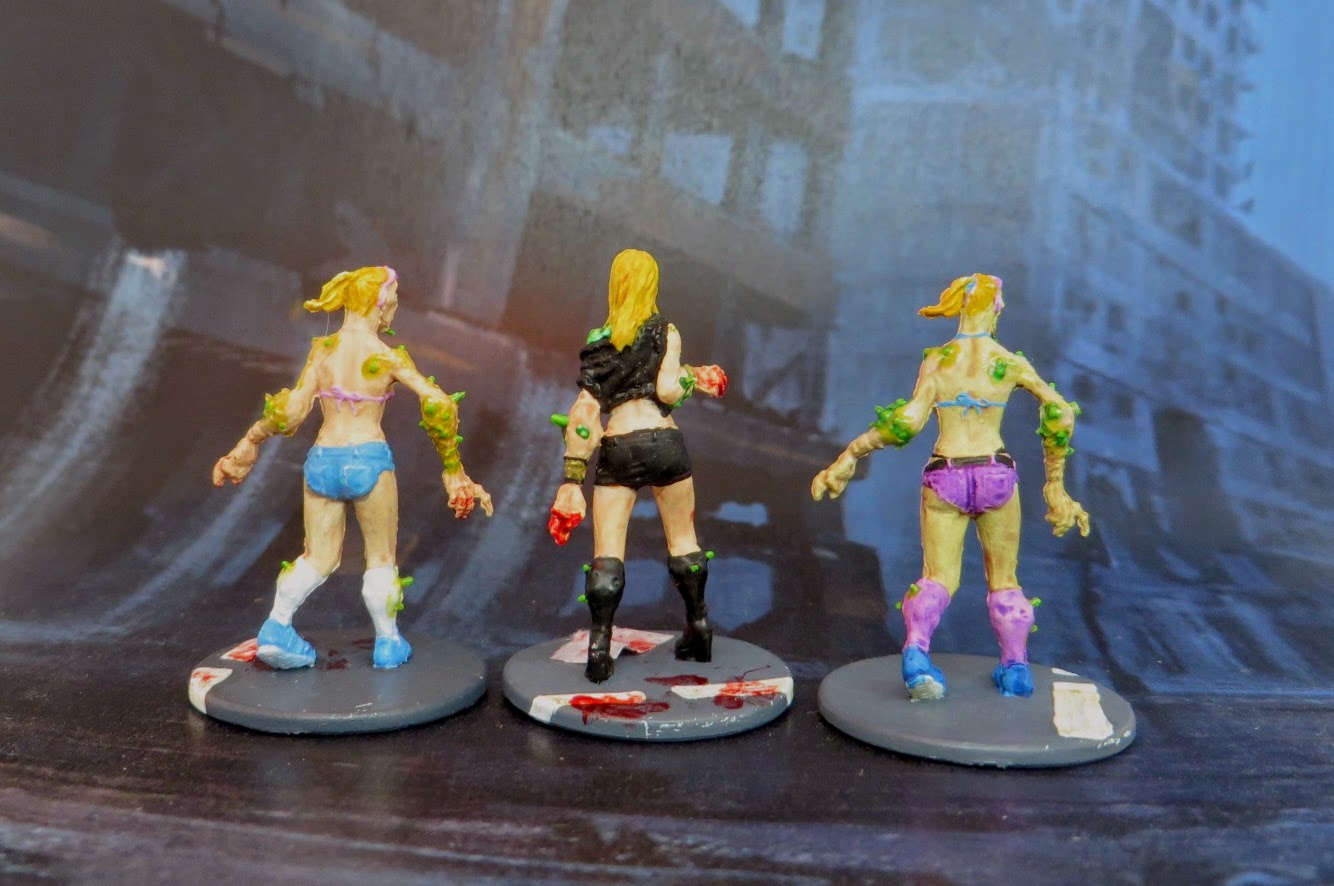 These zombies are nice models - suitably twisted and shanbling. I guess the zombicide setting is close to California with the large proportion of bikini clad women? 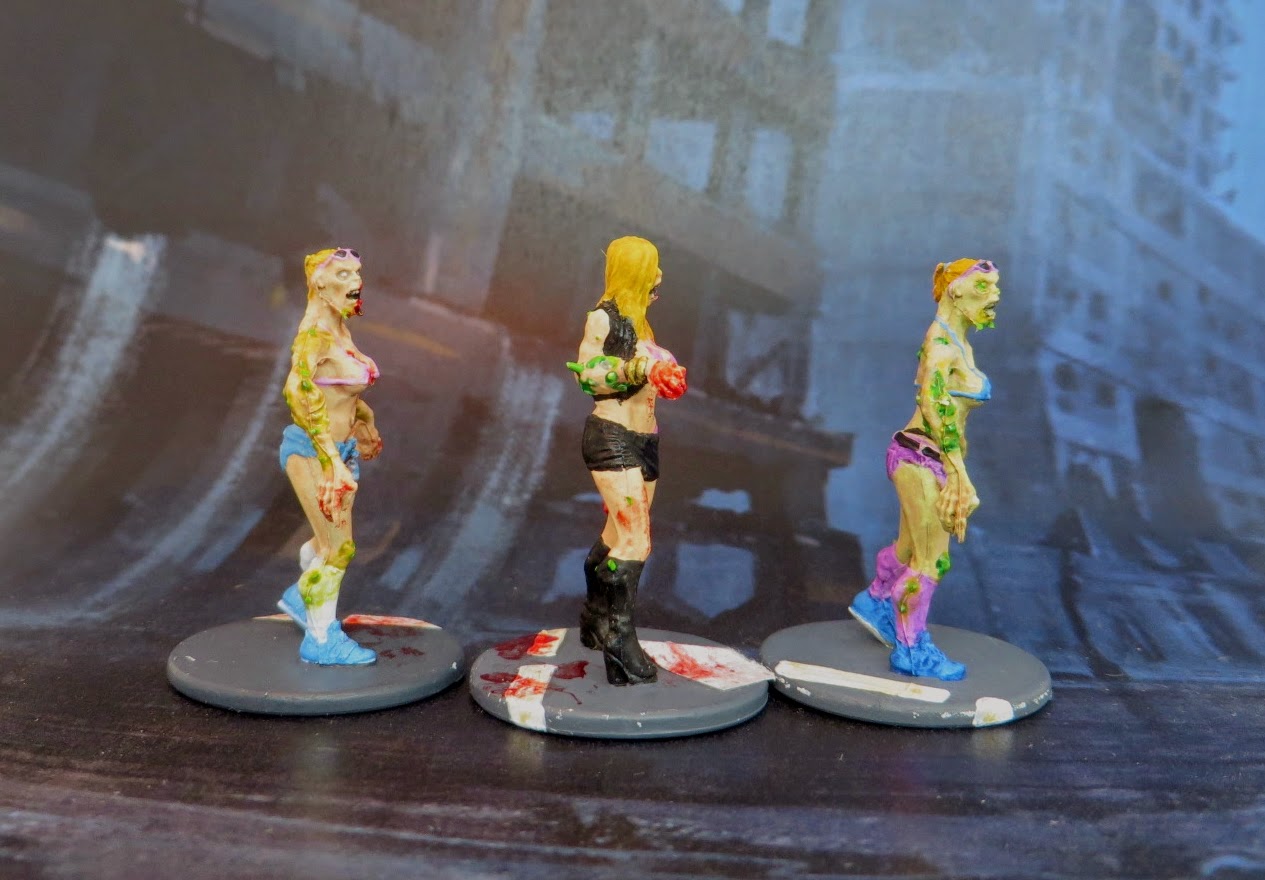 All the best,
Kasper
Posted by Kasper at 9:44 AM 7 comments:

Hello all,
Good News! It appears the forces of good - the ever troubled survivors of Zombicide - have been sent supernatural help!
During a recent zombie incursion a great beast ascended from above and began destroying zombies left and right! Local survivors only managed to get the following pictures of the beast, but even from these hastily snapped pictures it is clear that the beast is a formidable opponent: 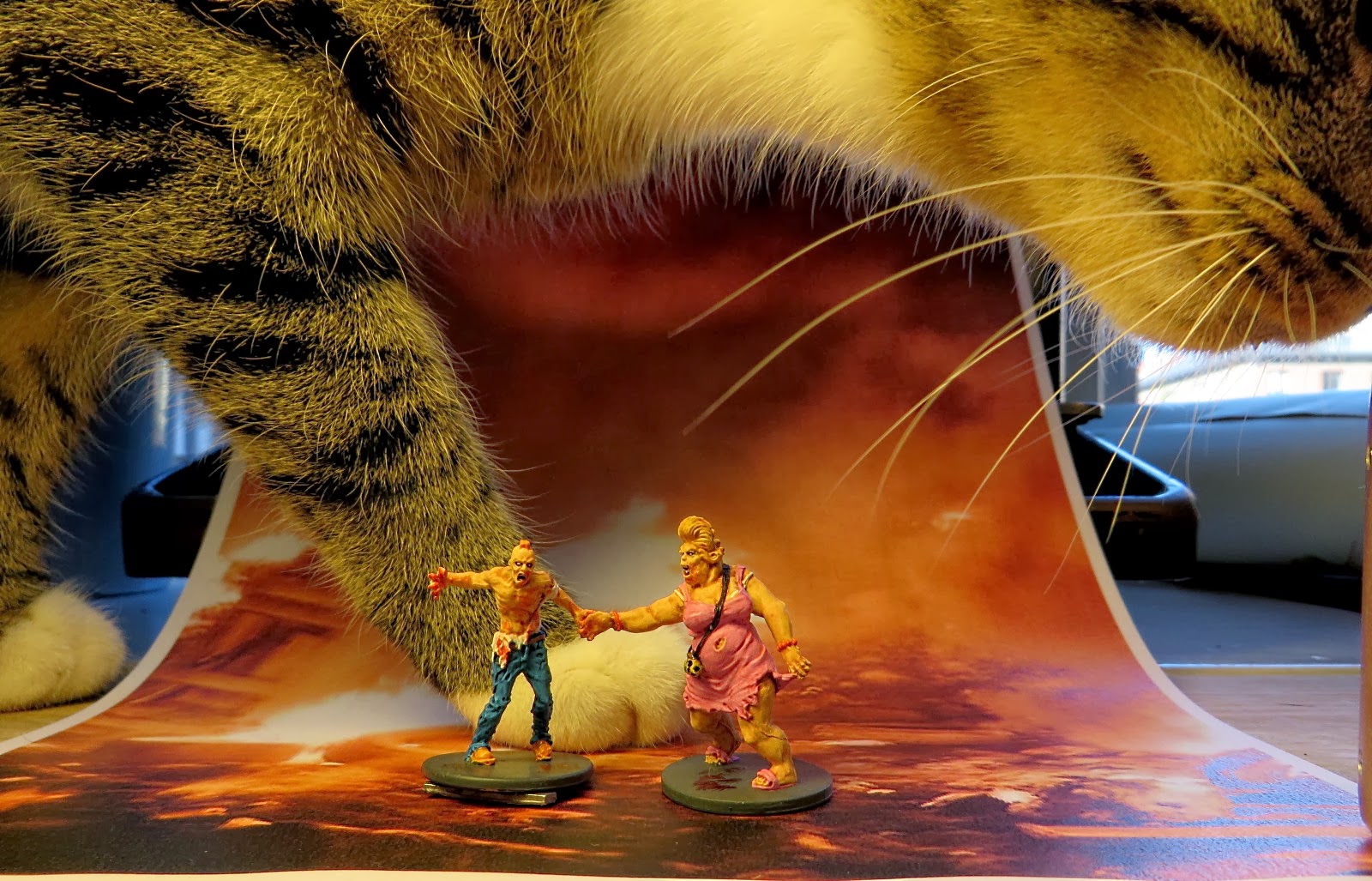 The beast soon killed the zombies (apparently, by knocking them downinto the abyss) and all survivors will in the future pray that it re-appears in their part of town! 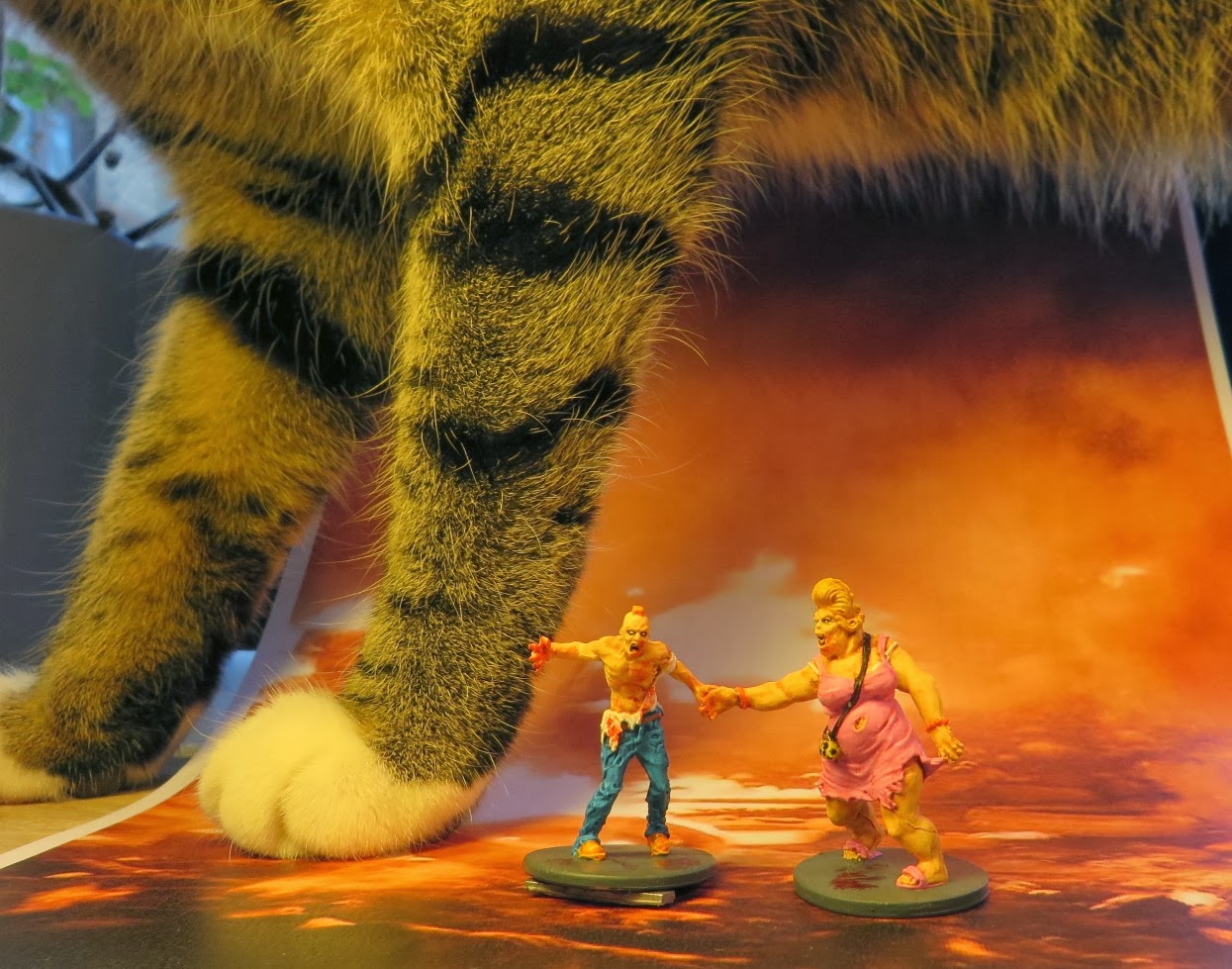 Seriously, I would kill that cat for scratching my zombies if it wasn't so damn cute. Clever creatures these cats...

All the best,
Kasper
Posted by Kasper at 7:19 PM 4 comments:

Hello all,
Another of Hasslefree's great Juvenile minis is this wee chap:


He goes by the name of Tom, and carries a squirt gun, a tin foil hat, and a mobile phone. No, I have no idea how he has managed to stay alive, but perhaps he was left behind in a toy store when the zombie apocalypse hit his city. Perhaps the gun shoots acid, or maybe he is simply blessed?


He was fun to paint, although he is absolutely tiny! I wanted some really strong colours on the gun, which si not what I have most of on my paintrack so that was a nightmare.

Hasslefree describe him thusly:
Winner of the 'Civilians & bystanders' category in the Area51 sculpting competition and sculpted by Tom Mason. This fearless little guy with his tin foil hat and 'super-soaker' water pistol looks all set to go into open combat with any aliens that threaten his sweetie collection let alone his planet! Approx 15.5mm to eye level and 21mm to the top of his head.
Tom Mason

He serves as a objective token most of the time, but my kdis love him and we all hope he survives each game :-).

All the best,
Kasper
Posted by Kasper at 9:49 AM 6 comments:

Hello all,
So having painted two of the least dressed survivors - and their zombivore versions - I figured I would present a side-by-side view of the ladies. The two are Dakota "Underboob" (more pictures here) and Lea "Miniskirt" (pictures here) and the interesting thing is how the two sets are a mirrored version of each other: 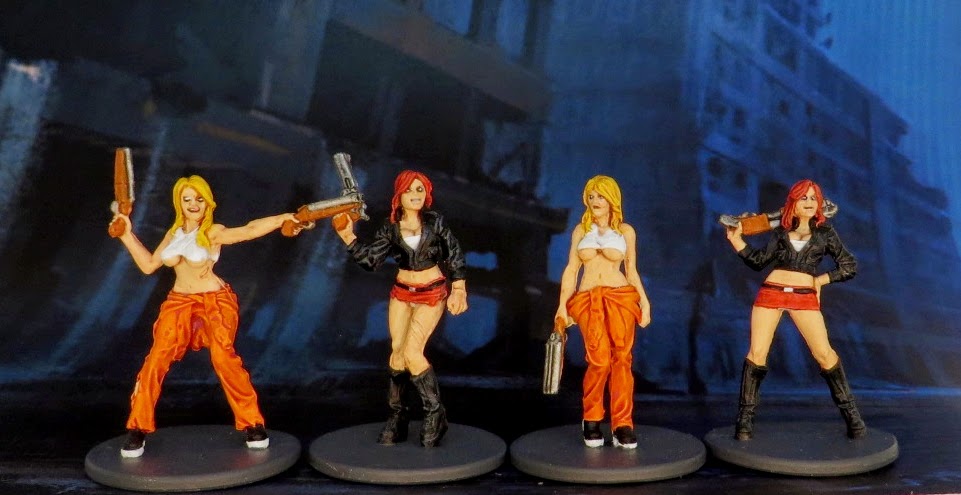 Note how the survivor Dakota is a mirror of Zombivore Lea, and vice versa for Zombivore Dakota and Survivor Lea - at least in the way their legs are positioned. Quite interesting.

Very nice minis to paint, and although they are a 'bit' underdressed they are part of a fun game and thus isn't something that I have a problem with - will be fun to use them in their painted versions next time we get a game going.

I'll have some pictures of them with gore and blood up sometime next week.

All the best,
Kasper
Posted by Kasper at 9:56 AM 2 comments:

Dakota: Queen of the Underboob - painted survivor and zombivore

Hello all,
Following Lea comes Dakota the Convict. Now if Lea is the queen of the miniskirt, Dakota is the undisputed queen of the 'underboob' (trust me, you don't want to google that term, or perhaps you do, I'll judge noone :-)): 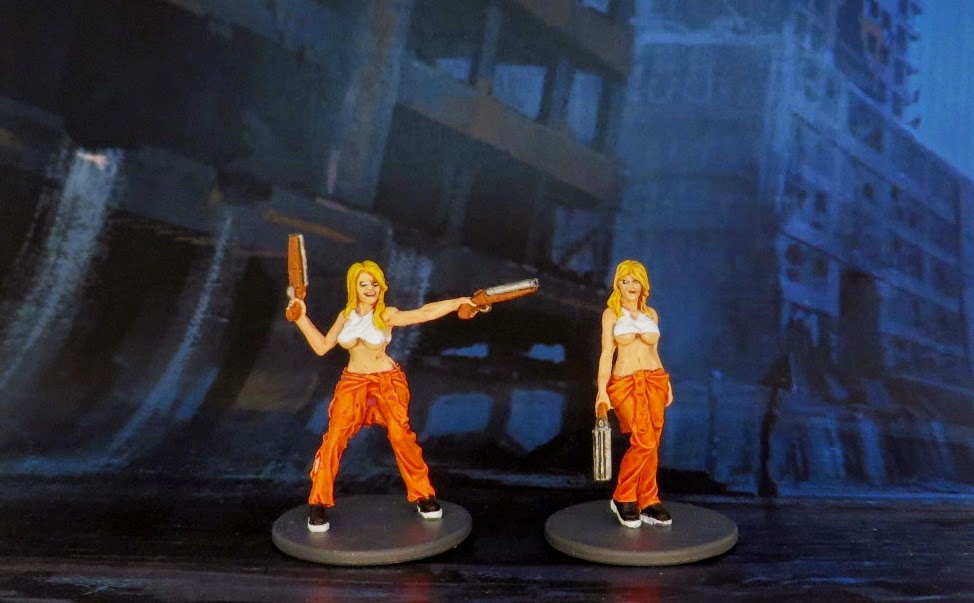 Again, this is a "before-all-the gore-has-been-added"-shot, and she was a pleasure to paint. And a quick paint job as well. The boobs do look exaggerated, but then again as she is supposed to portray   a more-or-less nude version of Pamela Anderson in presumably Barb Wire (?), she is actually spot on: 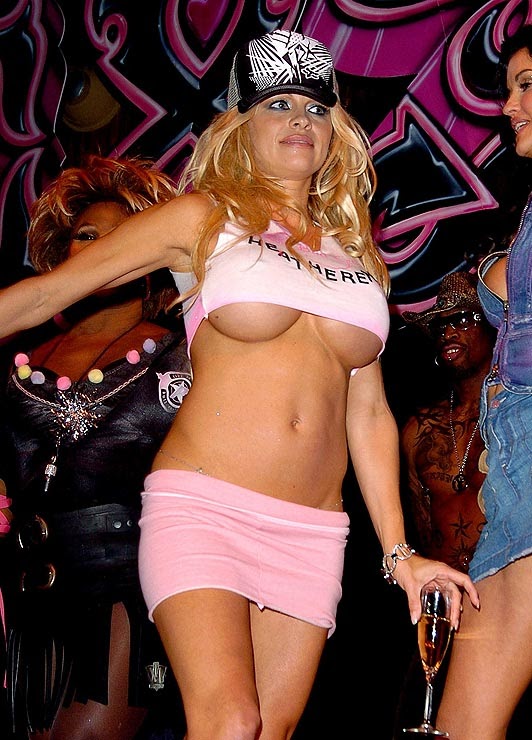 While Pamela is known for many things, a fashion sense has never been one of them. I must admit that the mini was a pleasure to paint, and even though she is semi-naked, I have little issues with this - it is a game after all and it was a pleasure to paint all that skin :-). I did have serious troubles identifying where her t-shirt was supposed to end at the neck - there is almost no details there. 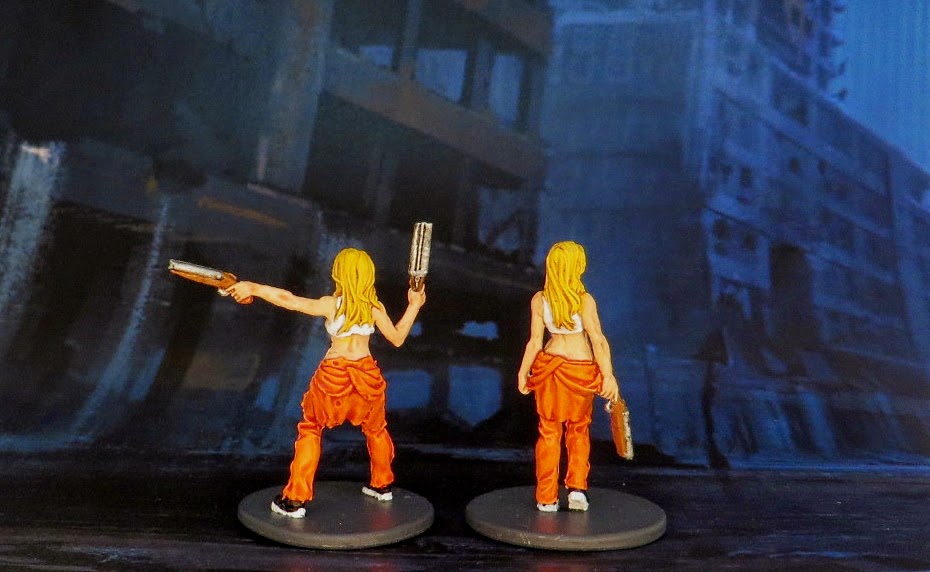 The official text on Dakota is as follows:


"The law no longer protects the weak. Nothing protects the weak. Do you feel weak?"
With her stunning looks and wits, Dakota could have lived a comfortable life. Instead, she chose a life of crime. She did time for everything from robbery to car theft. Her last sentence would have kept her inside long enough to go from the jail to the old folks home, but then the zombies came. Dakota is done running and hiding. She’s here to claim her liberty and gain respect by spilling zombie blood anywhere she chooses to call home. She speaks freely about her past to any survivor she meets and improvises according to their reaction. But is she really the evil person she claims to be?

I'll put up a shot of the two "queens of questionable fashion sense" shortly :-).

Zombicide: Lea, Queen of the Miniskirt - painted survivor and zombivore


I actually managed to paint a set of survivors!

The first is that rascally youth, Lea the Teenager. An optional promotional survivor from the last kickstarter she is - apparently - based on Emily Jean "Emma" Stone in her role as Wichita in Zombieland. A brilliant movie but while the face resembles that actress, the clothing does not really look like what Wichita wore.

And speaking of clothing, she is without doubt the queen of miniskirts - any shorter and this would be a "not safe for work" post. 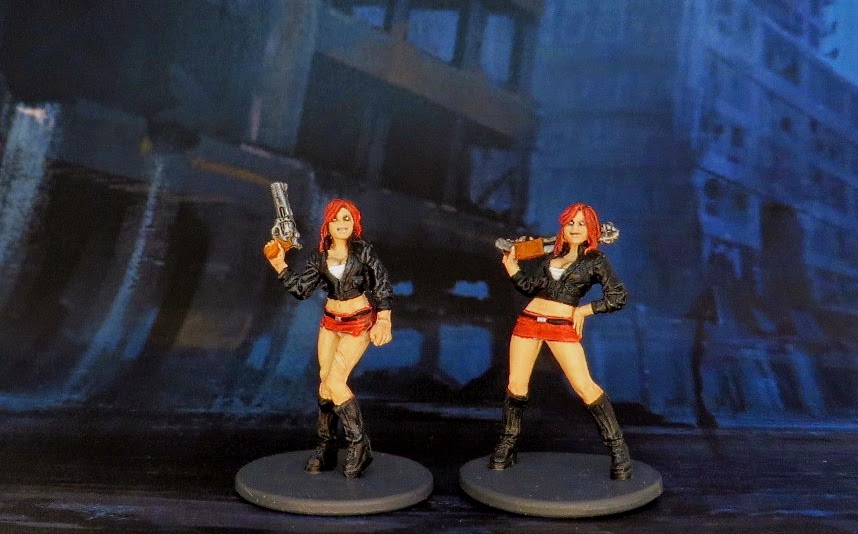 The mini is a brilliant sculpt and was great fun to paint - nice detailing and a well-shaped subject. I've tried to make her look as the official card (although her hair is more red, but I quite liked the nuance I got and didn't want to tone it down): 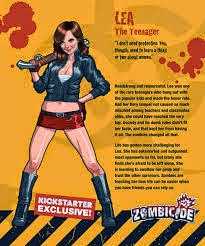 I've not finished her base yet, nor applied any blood to her (primarily the zombivore version) as I wanted to show a "clean" version. A bloodied version will follow in a few days. 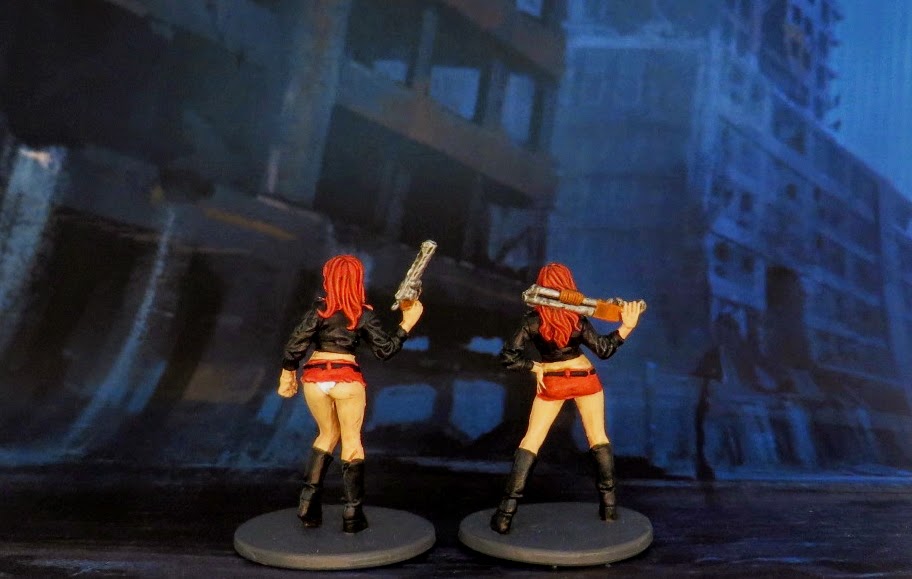 The official brief on this character is:


Headstrong and resourceful, Lea was one of the rare teenagers who hung out with the popular kids and made the honor role. Had her fiery temper not caused so much mischief among teachers and classmates alike, she could have reached the very top. Society and its dumb rules didn't fit her taste, and that kept her from having it all. The zombies changed all that.
Life has gotten more challenging for Lea. She has outsmarted and outgunned most opponents so far, but lately she finds she's afraid to be left alone. She is learning to swallow her pride and trust the other survivors. Zombies are teaching her how life can be easier when you have friends you can rely on.
Lea is an optional promotional survivor available to those that raise an extra amount on their pledge for the Zombicide Season Two Kickstarter campaign. A zombie version (Zombivor) will also be included.

All the best,
Kasper
Posted by Kasper at 1:38 PM 8 comments: